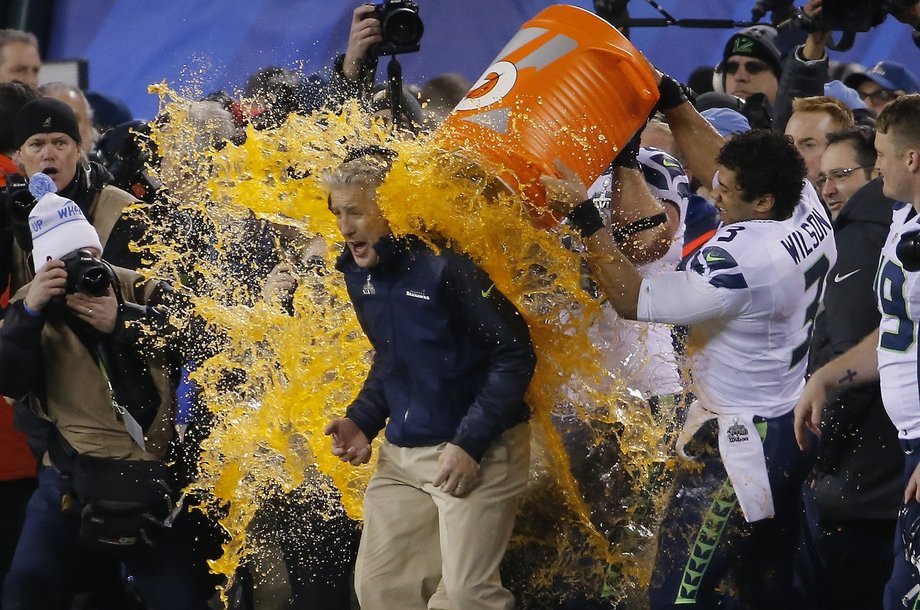 We waited two weeks for that?  The Seattle Seahawks dismantled the Denver Broncos last night in Super Bowl XLVIII 43-8, in what was probably the worst championship game I have ever seen.  The only thing that kept me from turning the game off was reading Twitter while it was going on.  When it was over, it felt like Peyton Manning was really the Seahawks so called “12th man”.  Manning just couldn’t get it going against the Seattle defense, which was in his face all game, and extremely physical with the Broncos wide receivers.  Denver picked a bad time to have its worst game of the season.  Peyton Manning will still be considered a top 5 quarterback all-time, but without more Super Bowl rings, will never be unanimously considered the best.  As for Seattle, they  proved that once again, defense wins championships (are you paying attention Mike D’Antoni?), in an NFL era that revolves around offense.  Congratulations to Pete Carroll as well, who completely turned Seattle around in 4 years, and now has a chance to contend for many more titles with his young core of players.  Looks like he knew what he was doing when he left SC.

In addition to the game being a complete snoozer, the commercials were underwhelming too.  There’s usually a commercial or two that gives me a good laugh, but I can’t recall a single one that was funny this year.  By far the strangest commercial was the Maserati advertisement, which featured a narration by Oscar nominee Quvenzhane Wallis.  You would think this was a trailer for a new horror film, but instead, it was an ad for the entry-level Ghibli model ($67,000).  That was probably the most important part of the commercial, which was never even explained.  However, the funniest thing I saw yesterday was prior to the Super Bowl, which was Frank Caliendo’s “30 for  30” mockumentary on Richard Sherman.  Take a look for yourself…..

On to the NBA, where the Lakers have completely thrown in the towel on the rest of this season.  How much more uninterested can these players possibly look?  They took a beating from Charlotte on Friday at Staples, and Al Jefferson completely destroyed him in the paint.  Once again, Mike D’Antoni complained about his team’s defense in the paint, but that’s like Jack The Ripper complaining about street crime.  Things should continue to get worse with the news last week that Kobe will likely be out for another month, and Nash tweaked something again while playing with his kids (I’m not even joking about that).  LA isn’t just taking a beating on the floor, but off as well.  TWC SportsNet ratings are down 37.5% through the first 40 games of the year.  I’m surprised they haven’t asked the Lakers for a refund on the season.  Magic Johnson decided to take my advice and stop “publicly” complaining about the team, but we know how he really feels at this point.

Once again, the Pau Gasol rumors have started too.  This latest rumor has him being traded to Phoenix for Emeka Okafor.  The Suns are loaded with 1st round picks, so LA will probably ask for one of those in the deal, if they are really going to trade Gasol.  Time is running out to move him. His value is low, but the Lakers had better realize it’s time to get something for him before he leaves them for nothing this summer.

Meanwhile, the Clippers are at it again.  The Clipps will reportedly sign Sasha Vujacic to a 10 day contract sometime today.  Was there really any reason to sign this guy, other than the fact he is a former Laker?  Once again, the Clippers moronic front office is trying get under the skin of the Laker franchise.  There’s simply no need for this guy on the roster, especially considering he hasn’t played in the NBA in almost 2 years.  On the floor, the team continues to roll, winning 7 of their last 10 games, and doing it  without the injured Chris Paul.

I’m very surprised that Indiana signed Andrew Bynum for the rest of the season.  It almost feels like they signed him just to keep him away from Miami.  The Pacers have plenty of people on their team that want to be there, and I don’t think he is one of them.  Bynum has demonstrated that he simply has no interest in playing basketball, and I still wouldn’t expect any less from him in his new home.

Get used to it Dodger fans:  this week ticket prices went up by as much as 140% for certain seats.  The Dodgers cited “unprecedented demand” for the raise in prices.  This is what happens when you have a $250 million payroll.  Frankly, if you put a winning product on the field, I have no problem with it.  On the other hand, when you’re the Lakers, and you put trash on the floor for a full season, and the fans are getting rapped on season ticket prices, then we bring out the pitchforks and tiki torches and start the riots.

Things could not be any worse for the LA Kings right now.  The Kings were shut out for the third time in 5 games on Saturday afternoon, as they lost to the Flyers 2-0.  Fans are so upset, someone threw a Louis Vuitton handbag on the ice in protest.  I agree that this team needs a little bit of a shakeup, but those of you who are suggesting that captain Dustin Brown be traded, or Daryl Sutter be fired, need to have your head examined.  It was only a month and a half ago that this team was playing some of the best hockey in the league.  It was just last spring that they were in the Western Conference Finals for the 2nd year in a row.   The Kings are defensive team, and the best in the league at that.  That’s their identity.  They aren’t suddenly going to open things up and play a faster tempo when they don’t have the personnel to do it.  We’ve seen the Kings go through scoring droughts before, and then they turn it around.  I expect the same, but it might not come until after the Olympic break.

As for the Ducks, they are also looking toward the Olympic break.  They lead the NHL with 85 points, but they’ve suddenly lost 3 of their last 5 at home, after Saturday’s loss to Dallas.  The way things are going, the Kings may end up sliding all the way back to the 8th seed, which may result in  a Kings vs Ducks 1st round playoff matchup.  As exciting as that would be for Southern California, that’s probably not a matchup that Ducks would want in round 1.

UCLA really blew it yesterday.  If they had handled business against Oregon State, they would have been just one game out of 1st place in the Pac 12.  In typical Bruins fashion, their defense got exposed after going cold from the field.  UCLA gave up an 18-2 run to the Beavers late in the 2nd half, and shot a pathetic 39% from the field for the game.  Sometimes, this team thinks it’s much better than it really is.  I guess that’s what happens when Steve Alford is your coach.

Do USC fans even pay attention to their basketball team?  The team is simply terrible.  They have no fundamentals, and their so called “run and gun offense” doesn’t really have much running involved right now.  Right now, the Andy Enfield hire looks like a science experiment gone terribly wrong.

Finally, very sad to hear the news about Philip Seymour Hoffman.  Hoffman was found dead in his apartment in Manhattan yesterday, in what appeared to be a drug overdose.  Most will remember him for the Oscar he won in “Capote”, however, I will remember him for many of his other phenomenal performances.  Hoffman was one of those actors who the average person probably didn’t know, but every actor in Hollywood could tell you how amazingly talented he was.  He could be brilliantly serious, or he could make you laugh.  He could do nearly anything he wanted to on screen.  Ironically, my favorite movie he was involved in was “Along Came Polly”, in which he provided plenty of laughs.  RIP Philip.