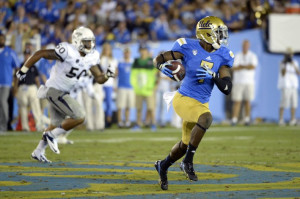 The UCLA football team opened their season in spectacular fashion on Saturday night at the Rose Bowl.   The Bruins pounded Nevada 58-20 to kick off a season that is beginning with high hopes for the UCLA faithful.  The Wolf Pack put up a good fight in the first half, but the Bruins exploded for 41 points in the 2nd half to cruise to an easy win.

I would say I had the pleasure of seeing this victory first hand, but considering it was nearly 90 degrees with 61% humidity at game time, I think I was just fortunate that I didn’t die of a heat stroke while attending the game.  Nevertheless, Bruins quarterback Brett Hundley put up video game like numbers against Nevada, as he finished with 274 yards passing, to go along with 2 touchdown passes, and 2 rushing touchdowns.  If he keeps this up, he might have a chance of getting invited to NY this winter for the Heisman Trophy ceremony.

Even more impressive was the Bruins running game.  One of the biggest question marks for this team coming into the season was how they would replace running back Jonathan Franklin.  At least for one night, that question was emphatically answered by junior Jordan James, who rushed for 155 yards on 21 carries, while adding a touchdown.  James got plenty of support from his teammates too, as Hundley rushed for 60 yards, freshman Paul Perkins rushed for 55 yards, and the Bruins ran for a total of 345 yards.

Much of this can be attributed to the job the Bruins offensive line did, which did not allow Hundley to be sacked once.  Just 8 plays into the game, Hundley ran for a 37 yard touchdown to put the UCLA up early.  For the first time in nearly a decade, the Bruins actually have a good quarterback.   Head coach Jim Mora Jr. said “if there’s one place you want security, it’s at quarterback.  He just really wants to be a great player.  Youv’e got to love it.”

Bruins fans are definitely loving it.  Although you might not have been able to tell from the less than capacity crowd that showed up.  The attendance was announced at 60,562 , which is far less than its capacity of over 90,000 .  Much of this can be attributed to UCLA not actually starting classes until late September, which usually limits the crowd at the first game.  Also, the heat was brutal.  Many of the prime tailgating spots were vacant right up until game time, and many people probably didn’t show up at the Rose Bowl because they feared they were going to melt.

As for the Bruins, there are still questions that need to be answered on the defensive side of the ball.    The secondary has been rebuilt, but it was pretty untested in the season opener.  UCLA had a knack for giving up huge plays last season at very inopportune times.  Against Nevada, they didn’t give up any huge plays, but they did surrender 353 yards to scrappy Wolf Pack quarterback, Cody Fajardo.  They’ll need to tighten things up in the coming weeks against better competition.

UCLA will have a bye next week, then travel to Lincoln to take on 18th ranked Nebraska on September 14th.  The Bruins have a tough road ahead of them, including road games against Stanford and Oregon in October.  Vegas lists the over/under on Bruin wins this year at 6.  That’s right….6 games!  As tough as the schedule is, I can’t see this team winning less than 8 games.  The Bruins played 11 freshman yesterday in significant roles, and although inexperienced, they appear deep and talented.  Something big may be Bruin in Westwood.