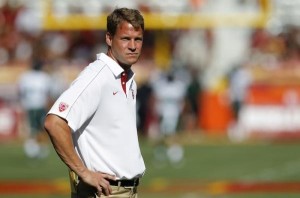 The Trojans shocked the college football universe on Sunday morning.  Coach Lane Kiffin was fired just hours after losing in embarrassing fashion at Arizona State.  I can just hear all those wealthy SC alums screaming with joy from their mansions in Newport Beach and Beverly Hills.  Instead of calling athletic director Pat Haden everyday, urging him to fire Kiffin, instead they’ll be calling everyday urging him to hire Broncos defensive coordinator Jack Del Rio.  We all knew Kiffin was probably going to get fired eventually, but the real shock was getting rid of him in the middle of the season.  Haden deserves credit for such a bold action at this point in time, which should give him time to save his recruiting class, and find a great coach.    The constant drama that Kiffin brought to the USC program had become unbearable for Trojan fans, as was their performance on the field.

Kiffin’s final debacle was a 62-41 beat down at the hands of Arizona State on Saturday night.  Weren’t the Trojans supposed to be a good defensive team?  Quarterback Taylor Kelly carved up USC like a Halloween pumpkin for 351 yards, while the Sun Devils racked up a total of 612 yards.  By the 4th quarter it was clear that the defense had simply quit on Kiffin, and he had lost the team.  Oh yea, and the offense was still terrible too, as they turned it over 4 times, and Marqise Lee injured his knee to make matters worse.  Good luck to interim head coach Ed Orgeron!  He’ll need it to put out this dumpster fire.

I love how sports fans on the east coast seem to think that people in Southern California don’t care about their local sports teams, and are simply fair weather fans.  If that were the case, then the decision makers wouldn’t have succumbed to the public pressure to fire Kiffin, Mike Brown, Terry Murray, Randy Carlisle, Rick Neuheisel, and Ben Howland, over the last two years.  Heck, Mike Scioscia might be fired in the next couple of days, Mike D’Antoni is going to be fired any minute, and Don Mattingly isn’t safe yet either.  If you’re a coach in the LA sports market, you better win or your job isn’t safe.

On to baseball, where the banged up Dodgers have wrapped up the regular season, and are limping over to Atlanta for the start of the NLDS vs the Braves.  Yesterday, the Dodgers discovered that Matt Kemp will miss the entire post season, after re-aggravating his ankle injury.  LA is already dealing with an ankle injury to Andre Ethier, who will probably only be able to pinch hit in the NLDS.   Even Hanley Ramirez and Yasiel Puig feel like they are being held together by duct tape at times, with the amount of days off they’ve been given recently.  The good news however, is that they will be facing an Atlanta team that has cooled off just as much as the Dodgers have in the last month.  The Braves starting pitching is also no match for LA’s trio of Kershaw, Greinke, and Ryu.  If the Boys in Blue can score a few runs, which they’ve done without Kemp, I see no reason why they can’t put this series away in four games. 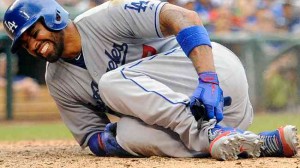 Meanwhile, the Angels season is over, and it’s decision time in Anaheim.  Will Arte Moreno fire general manager Jerry Dipoto? Or will it be skipper Mike Scioscia?  Both?  Or even keep them both.  Dipoto seems to be planning on being around in 2014, because he recently told the media about his off-season plans to upgrade the pitching.  Of course, part of his plan included the possibility of keeping underachieving Joe Blanton, who is owed another $7 million next year.  That comment probably didn’t help his chances of keeping his job, and should get him a slap on the back of the head as well.  If Arte Moreno is serious about turning this around, he needs to get rid of both Scioscia and Dipoto.  It’s the only way to re-energize the team, while giving them the best chance to hire a great GM and skipper.  More importantly, it will send a message to Mike Trout that the team is serious about keeping their franchise player happy.

The Lakers opened training camp on Saturday afternoon, and much to my disappointment Mike D’Antoni was still the team’s head coach.  Of even greater concern is the fact that Kobe Bryant admitted that there was no exact timetable for his return to action.  Bryant sounds hard pressed to be ready for the season opener on October 29th, when he isn’t even able to run on his surgically repaired achilles tendon yet.  Thanksgiving, or even Christmas sounds like a possibility, but the Lakers season could be over by then for all intents and purposes.  D’Antoni said he isn’t sure yet who 3 of his 5 starters are going to be to open the regular season.  That’s probably because most of your players shouldn’t be starters in the NBA Mike.  Stay tuned…. this could be a spectacular failure just a few weeks from now.  Here are some of Kobe’s comments from media day….

Kevin Durant seems like a great guy and all, but he must have been sitting out in the sun too much this off-season.  Durant claimed that James Harden, his former teammate, should be in the top 10 NBA player rankings by Sports Illustrated.  Durant said that Dwayne Wade should be removed from the top 10, and Harden should replace him.  Look I get that Dwayne Wade has been banged up of late, but Harden has never been better than Wade at any point.  Besides, Durant should stop calling out dudes that have three championship rings, and have beaten him in the finals, especially since he probably won’t be winning anything in OKC.

Speaking of failures, Time Warner Cable is a joke in case you haven’t experience it for yourself.  I decided to go with these guys over Direc TV, only because they have the Pac-12 network, and won’t be at risk to lose the Dodgers at the beginning of next year.  First, they charge the hell out of you.  $15 a month for Showtime? Then, they didn’t even give me all the channels I originally ordered, so I had to call them and have them correct my order.  As if that wasn’t bad enough, they were one hour late for the appointment, they don’t even have 1080 p high definition channels, and they send me a technician who is a shit talking Anaheim Ducks fan.  Look TWC, you’re on thin ice. Nobody comes into my home installing crappy cable service, and talking shit on my LA Kings.

A few quick thoughts on week 4 of the NFL.  The NFC East is a joke this year.  The Chargers are so fortunate they get to play against that crummy division this year, because that should pad their win total.  The Texans are softer than the Pillsbury Dough Boy.  So much talent, and so little toughness when things get tight.  The Broncos are just murdering people, and should just get bye weeks until the Super Bowl.

With the NHL season ready to start on Thursday, I think Kings and Duck fans should have their concerns.  For the Kings, if Jonathan Quick goes down with an injury, can Ben Scrivens really play goaltender?  Or does he just make cool Vine clips?  And for the Ducks, did they just catch lightening in a bottle last year, or can they keep scoring goals without the whiney Bobby Ryan?

If the government shuts down tomorrow….who will spy on me and continue to pile up our country’s debt?

How does McDonald’s make their coffee so damn hot? What do they do to that thing, stick it in a nuclear reactor?  It takes a good 15 minutes for it to actually be drinkable.

I was unable to watch a live version of the series finale of Breaking Bad last night, however, there will be a full recap and breakdown coming shortly here on Jock Talk LA.